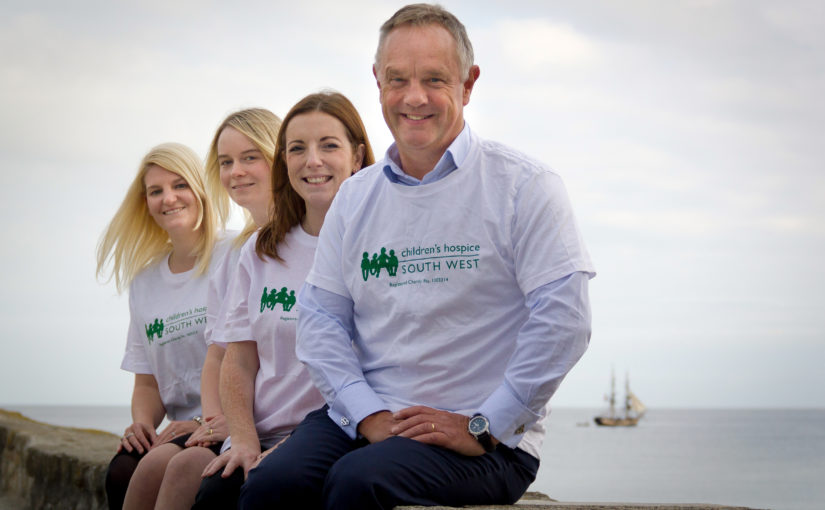 One of the Westcountry’s biggest law firms has raised over £5,500 for Children’s Hospice South West. The charity provides hospice care for children with life-limiting health conditions across the South West.

Staff from Stephens Scown LLP’s offices in Exeter, Truro and St Austell voted for Children’s Hospice South West as their charity of the year, and have raised the funds by taking part in two of the charity’s big fundraising initiatives: the Ride For Precious Lives and the £50 Challenge.

Stephens Scown’s managing partner Robert Camp was part of a team from the firm who took part in the Ride for Precious Lives, a demanding 205 mile cycle over three days from Cornwall to Bristol, visiting the charity’s three hospices. To support their colleagues who were on the road, staff from the firm’s three offices held a Cycleathon day, where they competed to see which office could raise the most money and cover the longest distance on an exercise bike.

The firm also took part in the charity’s £50 Challenge, where they were given £50 and had to compete against other local firms to see who could turn it into the most money. Stephens Scown staff did everything from furniture restoring to washing cars. The firm’s partner’s also got into the spirit of it, agreeing to be sponsored to perform as the Village People, get pelted by pies and in one memorable case, dress up as Snoop Dog!

Robert Camp, Stephens Scown’s managing partner said: “We have all been so inspired by the work of Children’s Hospice South West. Fundraising for such a fantastic cause has really brought our staff together, as we wanted to do our best and raise as much money as we could. On a personal level, it was a privilege to be part of the Ride for Precious Lives. It was a gruelling few days, but we met so many inspirational people along the way. It was an experience I will never forget.”

Bernadette Chambers, Corporate Partnerships Fundraiser for Children’s Hospice South West said: “On behalf of all of the children and families that Children’s Hospice South West supports I would like to thank everyone at Stephens Scown for their hard work in raising vital funds for our special cause over the past year. The support we have received from the firm has been fantastic and it really will make a difference to the care we can offer at our hospices.”

Children’s Hospice South West will be Stephens Scown’s firm-wide charity until April 2017. Stephens Scown’s staff have been taking part in a range of other events including the UK’s longest abseil (dressed as a chicken!).