Our two office choirs The Rolling Scowns and Scown Roses have been entertaining Christmas shoppers in the run up to Christmas, and raising vital funds for our firm charities.

Our Cornwall choir, the Scown Roses, raised £124 during their performance on Pydar Street in Truro on 14 December. The money will be split between our Truro and St Austell office charities SANDS, the stillbirth and neonatal death charity and Beth’s Inspiration, which supports young people with cancer.

Kate Theophilus, a partner in our commercial property team in Truro and member of the Scown Roses choir said: “We really loved performing for Christmas shoppers. It certainly got all of us in the Christmas spirit, and I hope those who saw us felt more festive too. It is lovely to have received such generous donations for our office charities.” 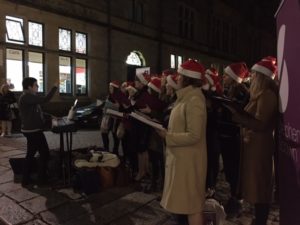 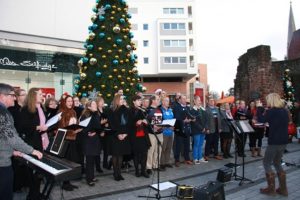 Stephens Scown introduced office choirs in 2014 after a firm away day when a team building activity involving a choir competition proved to be very popular. The choirs practice at lunch time and give several performances each year.